Motive of Aadhaar enabled payment system actually is to accomplish banking transactions of bank digitally linked with Aadhaar card. Shortly known as (AEPS) the Aadhaar Enabled Payment System provides secure transactional services of bank such as balance enquiry, withdrawal/deposit of money into account, transfer of money, etc. Aadhaar Enabled Payment System can also be described as safe digital payment system based on the Aadhaar card. Actually almost all the Indian banks have linked up the accounts with Aadhaar card and hence bank customers desiring for digital transactions need no any additional action under AEPS. Apart from BHIM (Bharat Interface for Money) the UMANG (Unified Mobile Application for New-age Governance) also is an app based on Aadhaar enabled payment system. A bank customer can personally operate the system provided he has seeded his bank account with Aadhaar card. This system applies on all the payment apps in India including BHIM and UMANG provided account is linked up with Aadhaar card. 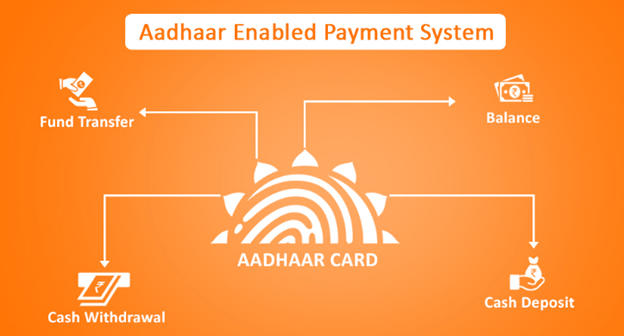 BHIM is an Aadhaar enabled app used for Aadhaar updates and financial transactions while UMANG avails benefits of popular government services/schemes abridging the gap between bank account and beneficial scheme/service. BHIM app emerged as a government app introduced a few years after the demonetization – 2016 declared by government of India during which PayTM did a great business earning a lot beyond expectation.

BHIM and UMANG provide the benefits of government schemes/services apart from helping in financial transactions but only after the identity of individual is authenticated with Aadhaar. The private E Wallet companies also provide digital transactional services with the existing bank linked with Aadhaar.  As far as BHIM app is concerned it is deals with both public sector and private sector banks such as SBI (State Bank of India), HDFC, ICICI Bank, Axis Bank, UBI, Kotak Mahindra, IDBI and Union Bank of India. It provides safe and secure Aadhaar enabled payment services, maintaining the reliability of system. The Aadhaar enabled payment system (AEPS) helps bank customers to accomplish digital transactions including the transfer of money from account, linked up with Aadhaar card.

The bank account should be linked up with Aadhaar. The banks have started accepting it as part of KYC (know your customer) to open an account. As almost all the banks have been linked up with the Aadhaar card the bank customers have got entitled to do digital transactions through AEPS (Aadhaar enabled payment system). As far as Aadhaar seeding or linking with bank account is concerned it is done with just a click of mouse.

Once your bank account is linked with Aadhaar you get entitled to all kinds of Aadhaar enabled transactions or payment services.

How to Avail AEPS Services?

As Aadhaar is biometric data based documents, the customer use Aadhaar number, details of bank and fingers.

Types of Services Available under AEPS

Well, these are some of the benefits where you can utilize it in a better way at any time. Once you started to handle, then you can even expect to experience more benefits than expected for sure.