Masked Aadhar Aadhar card holds a critical value in everyone’s life, and we can’t deny it’s important of the 12 digit number. As we need to use Aadhar card for every aspect of our life these days, it is not safe to carry the original one with you everywhere. Here comes the effective solution in the form of Masked Aadhar.

What is Masked Aadhar?

Masked Aadhar is like your original Aadhar card where you can find the only difference in the Aadhar number. In regular one, the whole 12 digits can be seen while in the Masked Aadhar, a part of the number will be hidden. It means you can only view the last four digits of your Aadhar number while the remaining numbers will be crossed.

Besides the Aadhar number, the masked Aadhar will have the same information, including your name, date of birth, gender, permanent address, and QR code similar to the original Aadhar card.

Masked Aadhar can be downloaded from the official website of UIDAI and follow the below-mentioned steps to begin your process,

Note: Before going to the steps, it is important to ensure that your mobile number should be registered in the database of the UIDAI website.

Step 2: then, in the ‘I have’ section, go for the option Aadhar/VID/Enrolment ID.

Step 3: In the next step, tick the Masked Aadhar box under the select your preferred option.

Step 4: Below, you can fill the necessary details in the respective fields. Finally, click on Request OTP and hit on the ‘I agree’ option.’

Step 5: In the dialogue box, you need to confirm the option to send the OTP.

Step 6: The OTP will get to the registered mobile number.

Step 7:  enter it in the respective box. And then take the quick survey give below.

Step 8: Once finished, you can hit on the ‘Download Aadhar’ option 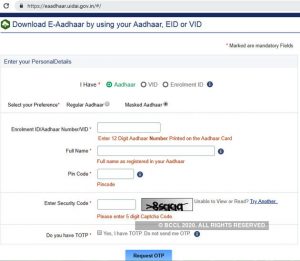 You have now successfully downloaded the masked Aadhar card in your device.

How to open the Masked Aadhar?

Even though you have downloaded the masked Aadhar card, you need a password to open it. The file will be generally protected with the password to avoid any illegal activities. Once you entered the correct password in the ‘Enter the password’ window, you can access the document which can be printed and shared whenever you want.

The password set for the Masked Aadhar will be an eight-digit number which will be in the format of the first four letters of your name along with the year of your date of birth.

We have curated some passwords according to different kind of names as,

When can you utilize masked Aadhaar?

In cases where disclosing the Aadhaar number is not necessary, masked Aadhaar can be utilized for eKYC. It just shows the last four digits of your Aadhaar number.

According to a circular issued by UIDAI on October 23, 2018, based on the opinion of the Attorney General of India, Aadhaar cards in physical form, e-Aadhaar, masked Aadhaar, and offline electronic XML files from UIDAI can all serve as Officially Valid Documents for KYC purposes.

Yes, the masked Aadhar card will be digitally signed and could be used as an identity proof anywhere. It could be for tickets for trains or airplanes, hotel room bookings. However, it won’t be acceptable for government welfare schemes like the LPG subsidy. Pradhan Mantri Ujjwala Yojana Scheme and others. These policies require the unmasked Aadhar that is an e-Aadhar card with the whole number.

Q2. What are the uses of a Masked Card?

Using masked Aadhar would beneficial for various reasons. As your real Aadhar card number will be protected in the masked Aadhar, no one can misuse the number. Unlike the common Aadhar card, the masked card could be easily downloaded from the official website.

We hope you have found our information in the article to be relevant to aid in protecting your Aadhar card details.